We can not deny that the meats are an excellent appetizer or complement to our plates.

It’s all the same sausage? 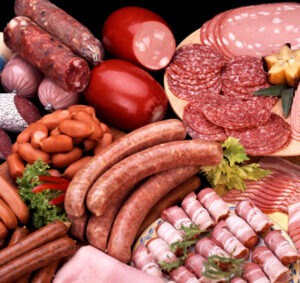 If you love sausage and yοu’re not willing to banish your diet, choose light products, but even those naturally lower in fat, such as those made from chicken and turkey. The light meats (eg Parizaki light, smoked sausage light) made from meat that has been treated partial removal of saturated fat. The normal Parizaki, has, for example, 12% fat, while the light just 2%.

Regarding calories, light is almost half as compared to normal. The sausages should be eaten in moderation is the bacon, the mortadella and salami, which is richer in fat.

But if you’re not a friend of meat, know that there are still vegetables and meats! That does not mean that we should rush to enroll in your plan weekly, but if you like different flavors, are a good suggestion.

Due to the high content of sausages in satureted fat and sodium, must be very carefully consumption in people with hypertension and cardiovascular diseases. Even turkey contains approximately 1 gr. sodium per 100g.

In recent years, entered the market with reduced salt meats, which may be a nutritional sentence for people with hypertension, confident enough to maintain order on their consumption.

What should I choose?

With the strides it has made food technology, it’s amazing how careful may be the manufacture of sausages. Whether reduced-fat sausage, or ham with reduced fat, are achievements that half a century ago was unthinkable.

Lovers of tradition, however, may remain faithful to the traditional village products, which usually are more rich in flavor and are produced using traditional methods.

At this point, should be put into consumer that the more traditional manufacturing are medothoi a delicatessen, the greater the chance of not having used sterile sites and tools during the production process or suitable conditions for breeding and slaughter animal whose meat is used for feedstock. This obviously poses health risks.

From the above it becomes clear that it is preferable to purchase sausage from the supermarket, primarily because it ensures a stable and safe product, a far greater extent than that of the village and more options, especially for those with known health problems.

The sausages are divided into the following categories:

Are sausages in natural or artificial casings. In our country, divided into two major groups: sausages and salamis. The sausages are usually made from raw meat, and seasoned by salami or heat-treated meat.

It is of chopped ham (kimadopoiimeno) meat from cuts of meat or a mixture of chopped meat, which have undergone heat treatment.

Prepare meats like air, except that after the partial maturation, subjected to heat treatment and partial dehydration, which lasts up to 3 weeks. Maintained at tepmeratures below 20ºC, for several months.

It’s formulations, which may be maintained at ambient temperature.

Remain in special chambers from 3 day to 6 months to ripen and partial dehydration.

Το mature, it takes more than 3 weeks. Distinguished by low water activity and low enough pΗ value of (5.4 to 6.0).